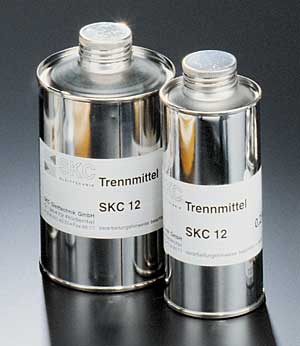 The releasing compound SKC 12 can also be obtained as a spray. The main field of application are complex components to be formed to size, having inaccessible points which can be reached much more easily by applying a spray.

The silicon releasing compound SKC 14 is used for all forming-to-size jobs. In particular, for the moulding of arbors or components with an overall coating, the lubrication effect of the releasing film allows a simple removal of the coated component. However, care has to be taken in the proximity of components which have be to lacquered later on, as removal of the silicon releasing compound is difficult and residues strongly affect the ability of lacquering.

The silicon releasing compound SKC 14 can also be obtained as a spray.

The release wax SKC 13 W is used to obtain releasing films thicker than those which can be obtained with other releasing compounds of the series SKC 12 and SKC 14. As SKC 12, it is applied with a cloth.
The release wax enables closing of even small pores in the surface to be formed.
For high-precision formings to size, however, this release wax cannot be recommended.
But it can be used for forming jobs from very rough counter surfaces.

See “Downloads” for a pdf-file about Press- & Cartridge-Systems.

Applying an adhesive spray, the shapes of the lubrication grooves are glued on the counter guideway, pressed-on well and then treated with a releasing compound.

After removal of the coated components, the lubrication grooves can be loosened easily from the slideway coating by means of a pointed tool.

See “Downloads” for a pdf-file.

Simple accessory to mix components of resin and of hardener. 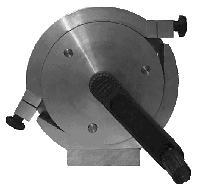 The hose pump SP 170 – developed by SKC – has been designed to feed continuously and via only one filling bore bigger quantities of a compound into a gap. Compared with the use of cartridges, no repeated putting on of the press is required.
For the injection or pouring technique, foam rubber profiles are used universally to seal the gap.

To generate pockets of a larger depth – in particular on hydrostatic guideways – preferably magnetic foils are used.

Thanks to the magnetic adhesive force, the cut pieces are easily positioned and cover the whole surface. They can be used many times. Cutting can be done with a sharp knife or scissors.